Front cover of the album.

The photo album seems to have completed a full circle, returning to Macclesfield after many years in Western Australia. Much of the history of the album remains unknown. Why did the original owners pack up and move to WA? Maybe it was the lure of gold!

In the 1970s the album belonged to Elsie Harrington who lived in WA. Was Elsie a descendant of one of these families? Following her death in 1976, her friend Inez Wells gave the album to Peg Vincent who was then living in Wattle Grove WA. Peg now lives in Littlehampton and has cherished the old album for years. Only recently she started to research the names of the people in the photographs.

She found our Macclesfield history website, came across the old family names and contacted us. Her intention was to pass the photos on to family members, but decided to donate the album to the History Group for safe keeping.  We are keen to make contact with anyone who might know a bit more about these particular families and/or would like copies of photos.

Ellis Family history and photos of Richard and Ada Ellis (née Pilben)
Samuel Ellis and his wife Charity arrived in Adelaide in 1839 and soon took up a lease on a block in Todd Street, Macclesfield, where they built a cottage and set up a business as shoemaker, and also cultivated a 4-acre block and raised a few cattle and pigs.  In 1849 they purchased sections 2780 and 2793 totaling 167 acres of farmland.

Samuel joined the general exodus of male population in 1852 to seek a fortune on the Victorian goldfields (with some success) and returned to Macclesfield to continue farming and raising a family of 7 boys and 2 girls and also taking an active part in local council affairs. 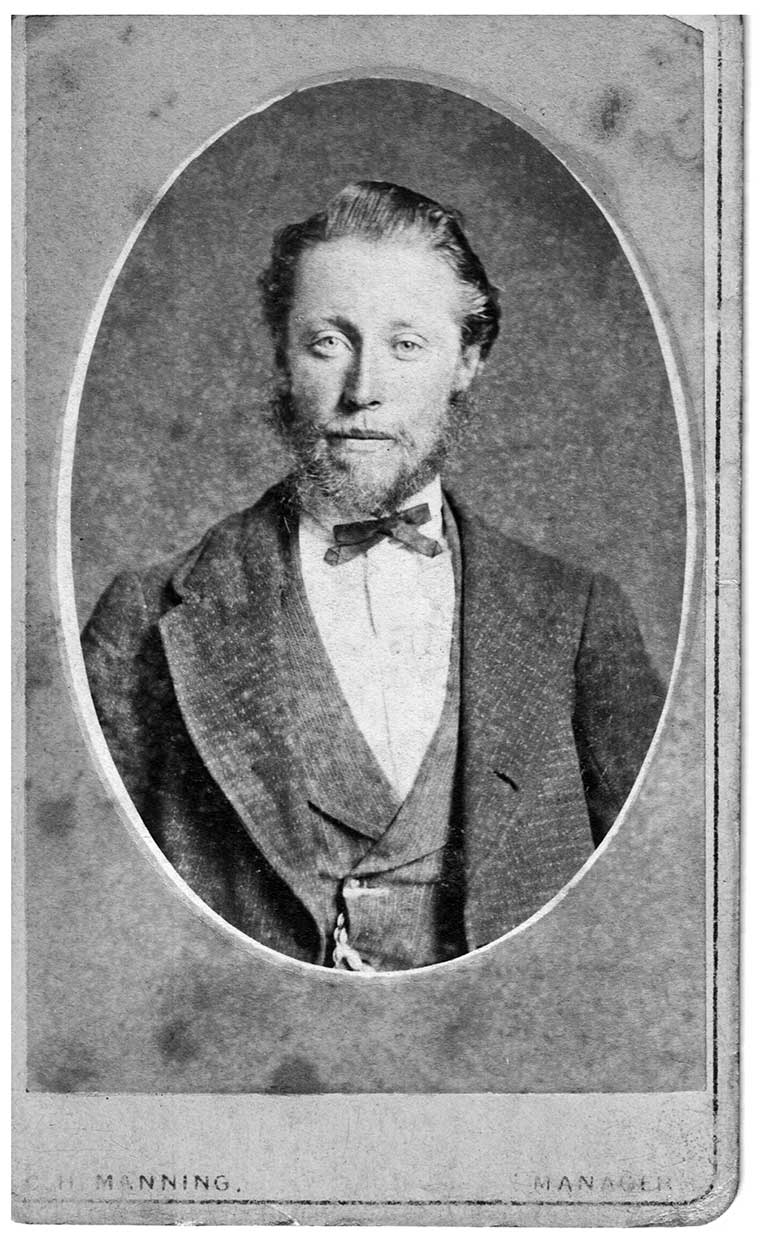 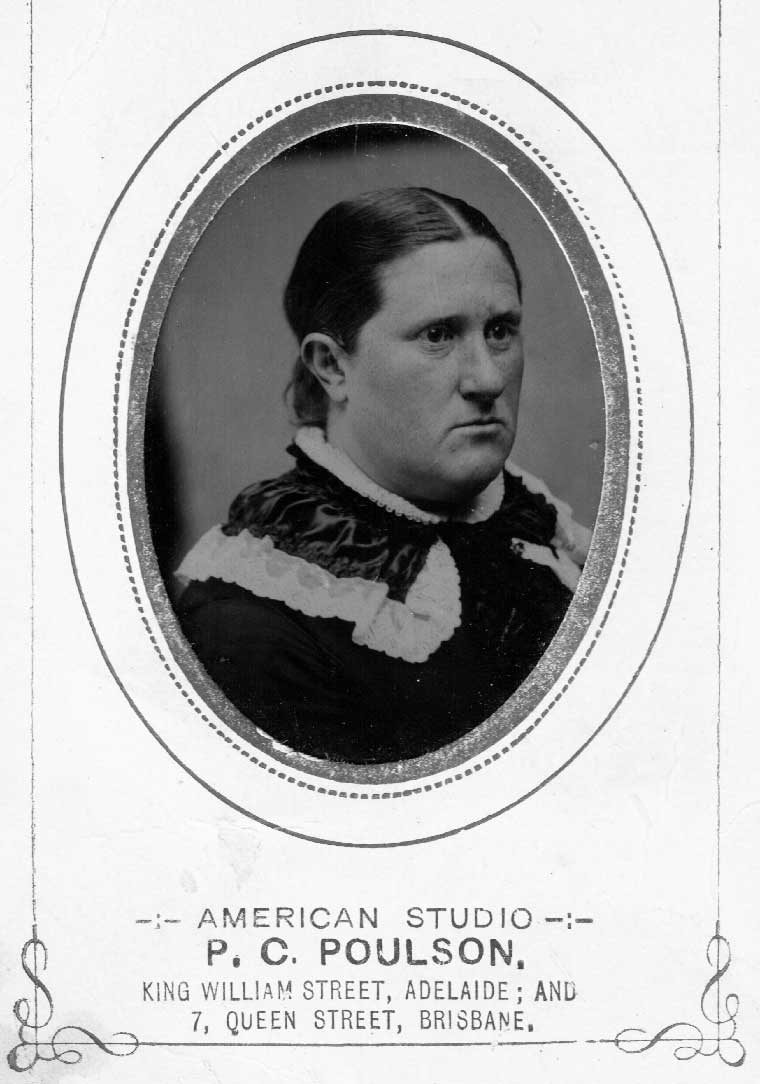 Richard Ellis was their youngest son, born in 1854 and at the age of 21 he married Ada Pilben. They had 4 children Florence, James, Percy and Claude. (The History of Samuel Ellis was compiled by Richard Campbell Besley and Evelyn Elizabeth Besley née Ellis).

The Pilben Family History and album photos of Eva and William, compiled by Florence Briggs.
Thomas and Sarah Pilben came originally from England, but met here. Sarah arrived with her parents, William and Harriet Reeds and their other children on the 'Oleander' in January 1840 and Thomas was here prior to that.

Later, they married in Holy Trinity Church, North Terrace, Adelaide, after which they settled in Macclesfield where Thomas built his house on his property of 92 acres on Section 2718 Hundred of Macclesfield. He also owned an acre in Venables Street.

In the early days they grazed cattle and later turned the land, or part of it, into a market garden. Eight children were born in the house, six of whom survived, namely: Ada see above, Harriet (Florence's mother), Lucy, Sarah, Eva and William. The family attended the Methodist chapel and received their early education at school in Macclesfield. After Thomas' death in the 1870's they moved to Young Street, Parkside, where they lived until Sarah died in 1892. 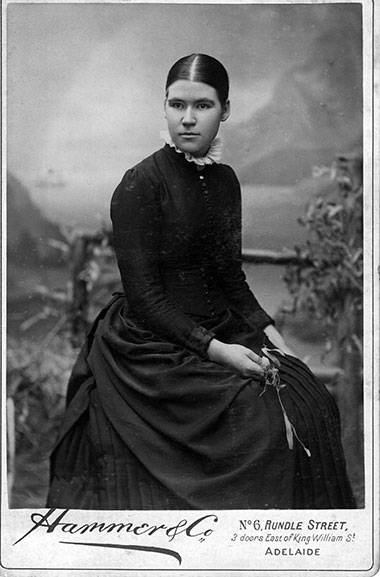 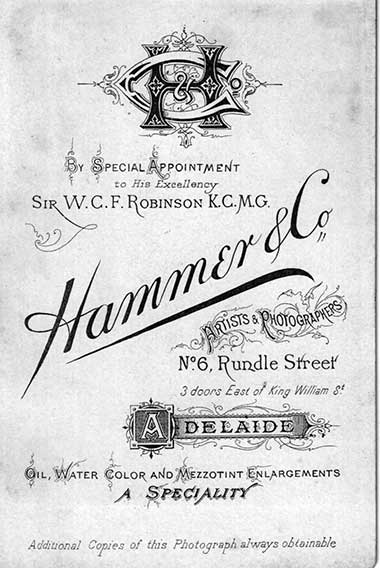 Eva Pilben, sister of William Pilben, and back of her photo.

Included in the album are many other photographs, some named and others unidentified. There are several members of the Strutton family, including Gus Strutton and AE Strutton (Sarah Pilben married Augustus Edwin Strutton of Thebarton on the 19th Nov 1890).

Others include Frank Bonnett, Jean Roddick, Jessie Purcell and Caroline Hounslow with daughter Floss see above. (By 1924, Floss had married AK Strutton and given birth to a son, Bruce Arthur. Birth notice in Chronicle, 5 April 1924).

Considering the age of the photographs they are all in excellent condition. Many are portraits from Photographic Studios in Adelaide and a number of them are 'Little Gem' tintypes, which are about the size of a postage stamp. Being quite robust they could be sent by post or carried in a coat pocket. They were popular during the 1860s and 1870s and often produced by travelling photographers. The photographic emulsion was applied directly to a thin sheet of iron (not actually tin) coated with a dark lacquer or enamel, which produced a unique positive image (ref. Wikipedia).

the First Nation people's
living history in our region.