This is a reprint of an article that we published in the Macclesfield Newsletter some time back, in conjunction with a series we had about the homes of the early settlers in the Macclesfield area, and in this article, specifically about a Macclesfield family named Sabey, but with some new information now added.

We are lucky enough to have received additional information about this family which ties into several other Macclesfield families and helps to increase our knowledge and understanding of those early farmers and how they married into other local families.

We wrote:-
"The accompanying series of photographs of old homes in and around Macclesfield features what we believe are the ruins of an old residence previously owned by the Sabey family.

This particular house appears to have been better constructed than some we have seen in this area, with very solid stonework and a large cellar built underneath utilizing the natural slope of the ground.

We have tried to find further details of the family, but have come up with very little information on these folk, unfortunately.

We have been told that in the early days this place may have been occupied by 'The Local Sherriff'.

For many years the "Nob" or sharply raised hillock behind the house has been known locally as "Sabey's Nob". 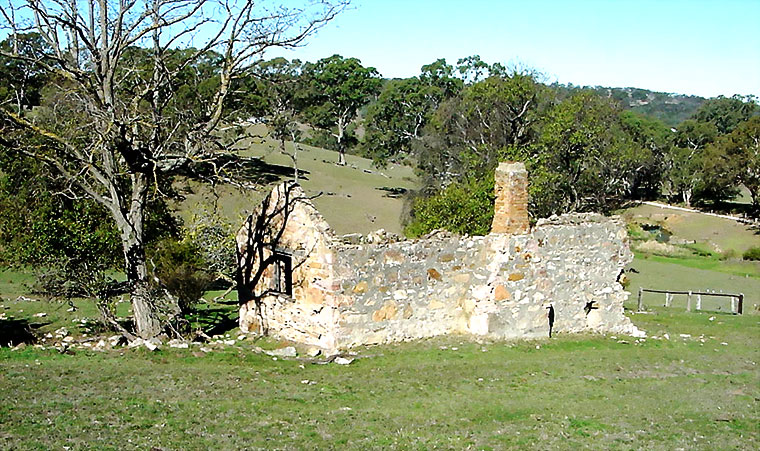 Sabey's house from the side

Research also shows that marriages, births and deaths of Sabey family members occurred in the area of "The Angas", Long Valley, North Strathalbyn, and further afield at Belvidere. Marriages took place between the Sabey family and the Warwick, McBeath, Kerr, White and Mills families within these general areas.

It is a shame that families who were here in such early days, to work the land under very harsh conditions and who no doubt made their mark on our area, have so little remaining to show for it".

Well, thanks now to Ms Pat Jaunzems who has kindly been in touch with our Betty White and who has provided some additional information, we are able to connect this Sabey family with other local Macclesfield families to put some meat on the bare bones that we had when we wrote the original article.

John Sabey was not the first to buy land and/or to start farming in Macclesfield, but he was here quite early and information from Ms Pat Jaunzems now tells us that:- on the 10th of February, 1854, he purchased approximately 116 acres in section 2794 from a Mr Henry Lewis, for the sum of £420. He owned this section, which was known as "Pudding Bag Farm" for some 32 years. It was sold in 1886 to William Hill, who farmed it for 33 years, when it was sold in 1919 to Daniel Passfield, (another well known Macclesfield family name). (More recently it was the property where the Chatterton's lived). 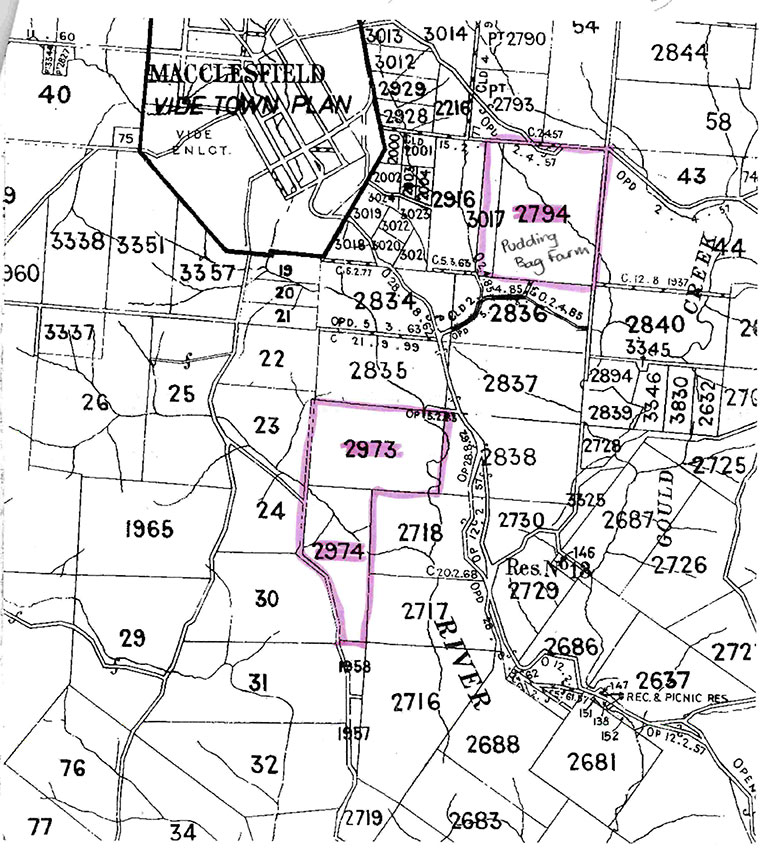 Amy married William Holloway in 1848 at her father John's residence near Macclesfield, and produced 12 children who were born in and around the Macclesfield area. John junior married Elizabeth Warwick and they also had 12 children, mainly born in the Wellington, Strathalbyn areas. The baby boy did not survive to come to South Australia. Elizabeth married Thomas Meara (Marra) and they had 3 children born around Macclesfield and Echunga. .

Thomas Meara (Marra) who was born in Kylebeg, Co Tipperary Ireland c1832, unfortunately lost his wife Elizabeth when she died in 1863, aged 22 years. Thomas then married Elizabeth's younger sister Sarah, at Trinity Church, Adelaide, and produced 11 children. So, John Sabey was a grandfather to 14 Marra children.

John Sabey's wife Sarah died c 1850 at Kaniva in Victoria and he then married Margaret nee Cleary Mara (the mother of Thomas Mara) 28th Nov 1851 at Long Valley (Near Macclesfield between Wistow and Strathalbyn - the old school building still exists there). John died aged 88 years, on the 5th May 1896 at Belvidere SA and, was buried 6th May 1896, at Strathalbyn.

What interesting facts from Pat, and we must thank her for passing on this information to add to what we had beforehand and for allowing us to reproduce it here. The Macclesfield Newsletter does try to inform, and hopes to produce results from time to time and, that is very heartening to us all.

We have been asked - why all the interest in the past - well, every single one of us is where we are today because of what our forebears did. If it wasn't for their actions we would not be here at all and I think most of us rather like being where we are and what we are today. Sure, we try to make our own lives but we all carry within our genes, a part of our past.

We mentioned in our original article that several families were linked through the Sabey's, we can now add another (Holloway) to the list.

There are quite a few Macclesfield people walking our streets today because of one John Sabey. The Meara (Mara/Marra) names lead to Chesser, Anderson, McNamara, Wallace and other well known Macclesfield names.

The original article was written for the Macclesfield Newsletter by Ray Risely.