Not something one normally associates with our area, but in the early days some local farmers experimented with growing tobacco.

Thanks to Don FRY for most of these images.

During the mid-twenties, Mr James HENDRY at Glenhurst Farm grew a 4-acre crop of tobacco, just off the main road some 2 miles on the Adelaide side of Macclesfield. It entailed plenty of hard work, such as raising the seedlings in seedbeds, which had to be covered with a hessian cover of an evening, as tobacco will not stand frost. 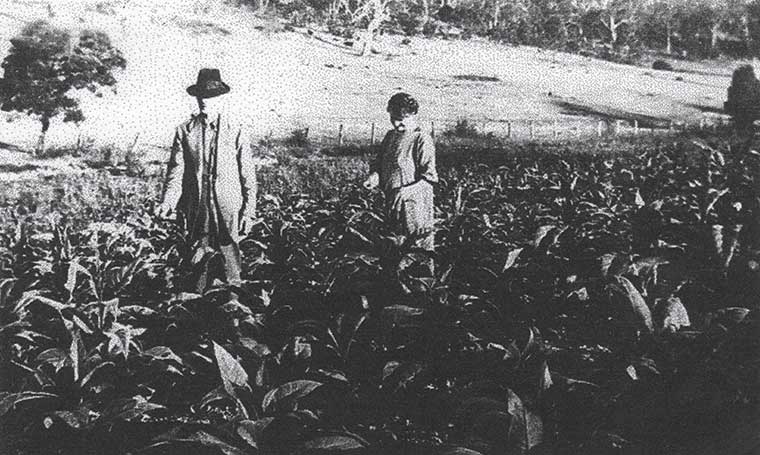 The HENDRYs of Glenhurst Farm in their tobacco crop

Planting was carried out by hand after the ground had been well ploughed, rolled, harrowed and cultivated to bring the soil to a ﬁne tilth, then ﬁnally fertilised. Planting was done by hand in this case as the price of a machine was out of the question. Plants were spaced 3 feet apart with another 3 feet between the rows as the leaves on some varieties grow really huge. After planting, the young plants had to be watered by hand, as there were not the facilities around as we have today.

When the plants had established themselves, it was necessary to keep the plants well cultivated. The area that could not be done by horse cultivator had to be done by hand, a real backbreaking task. As well as cultivating, other jobs involved were dusting the leaves with Paris Green to combat ‘Riddlers’ which invaded the leaves, also cutworms. And de-suckering the young offshoots like pruning tomatoes. This allowed the plant to feed the leaves and so increase their size. Harvesting the leaves was carried out in autumn after the leaves had mottled. The leaves were picked by hand, loaded onto a sledge, and taken to a curing barn where the leaves were strung on sticks and placed in racks. Wood was the medium for heating the barn.

For the first day or two wet bags were kept on the floor of the barn to raise the humidity. After this, dry heat was used for several days until the tobacco was cured. When checking thermometers during this period, one did not waste any time as the heat was really stifling, and it was a case of in and out again quickly.

When curing was complete, the leaves became very brittle and would soon fall to pieces if touched by hand. To overcome this all doors and hatches were left open for several days so the leaves could absorb moisture and become pliable again. After the leaves had become really pliable they were then graded as to size and colour etc, they were then made up into hands, baled and finally freighted to the buyer in Melbourne. 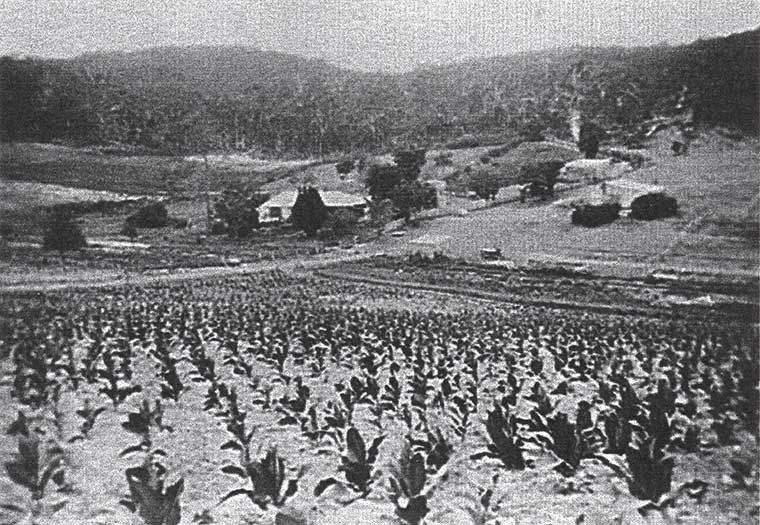 Others to grow tobacco in the district were Messrs H & C MILLER and Mr. E. FRY. Tobacco was also grown at Paris Creek and Mount Barker. The Dept. of Agriculture erected two curing barns and a packing shed for those who did not have these facilities. They were situated between Flaxley and Mount Barker on the South East corner opposite the tum-off to Echunga, and this corner was known as Cooper’s Corner. Today houses occupy this site.

The price received for the leaf was so disappointing however that local growers soon reverted to their usual pursuits, although they had proved that tobacco would grow in the district.

An almost mature tobacco crop was ruined by a severe hail-storm, when several inches fell in a 1/2 hour about 1925. 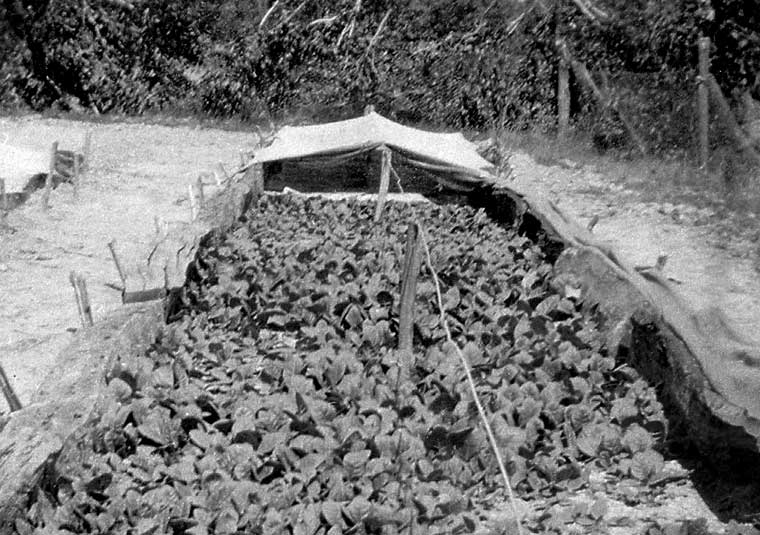 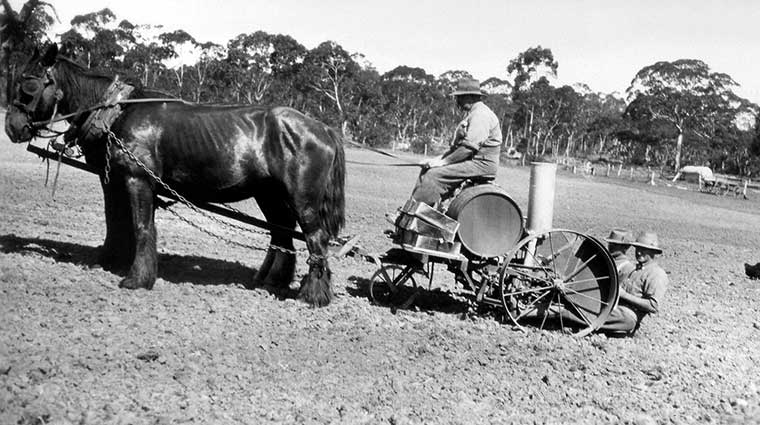 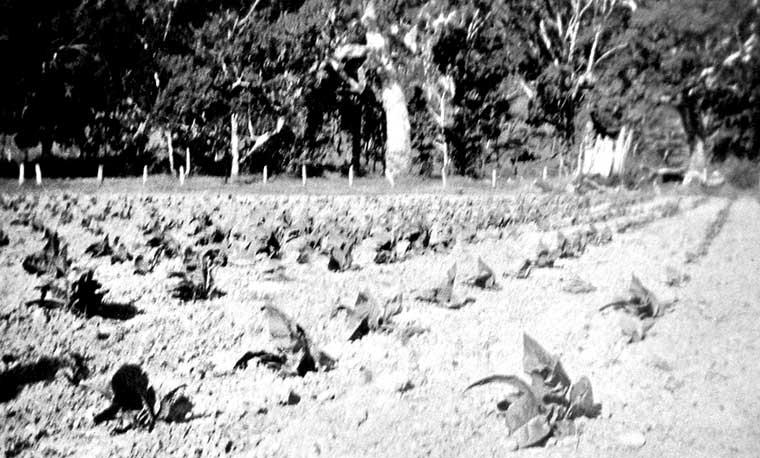 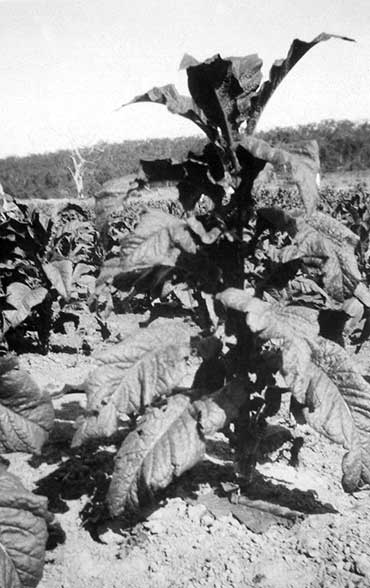 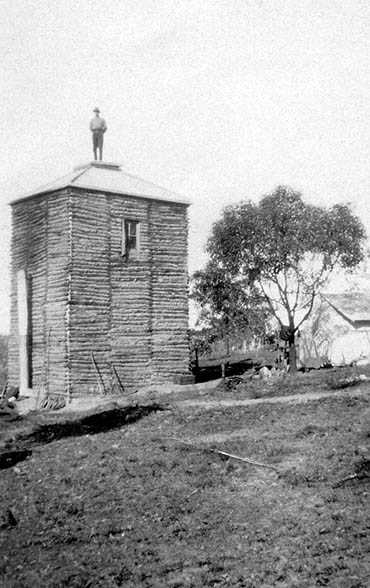 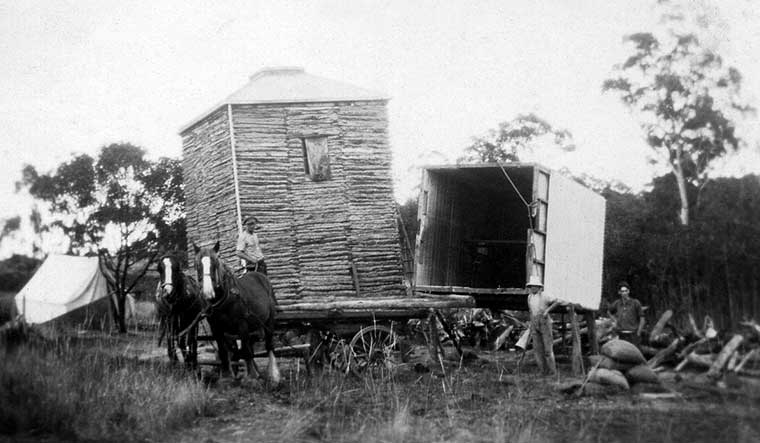 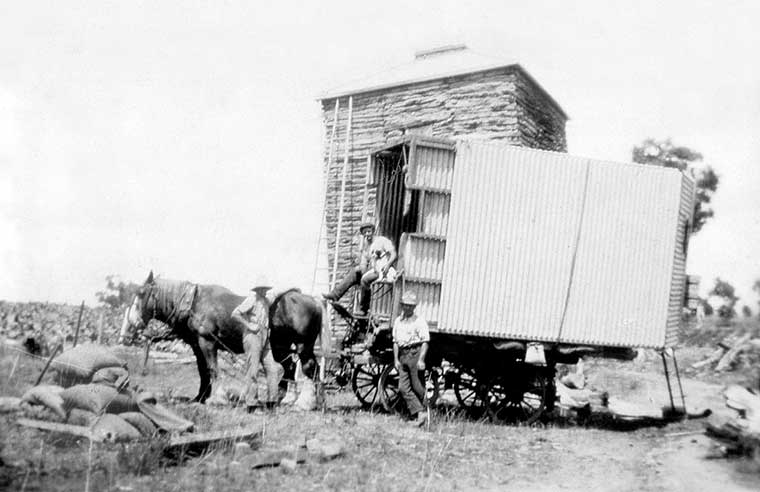 Barn on trolley, kiln in background 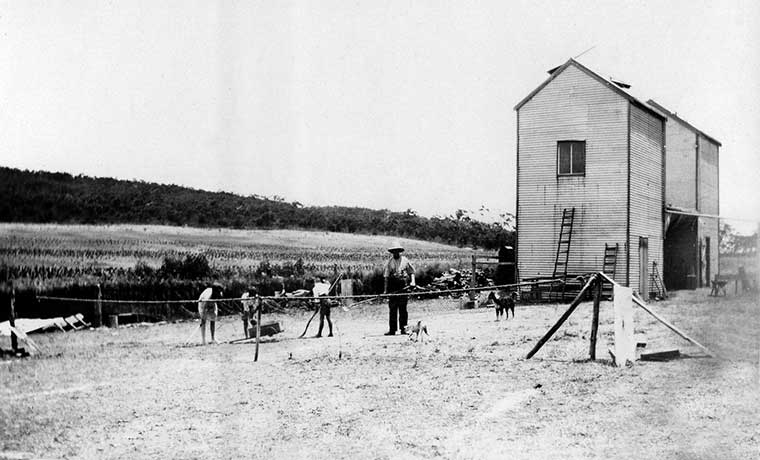 Tobacco barns with kids. It is probable, but not absolutely certain, that these barns are on Mr Les BARTLETT’s property at Paris Creek. Mr BARTLETT was the father of Marj. FRY.